Can Financial Incumbents Learn to Play The “Right Note”?

“Insanity: doing the same thing over and over again and expecting different results.”
- Albert Einstein

History - Music Industry’s Muted Response to Tectonic Industry Changes
There are striking parallels between the music industry from two decades ago and the financial services industry today. Internet technology offered a catalyst to listen, purchase, and interact with music in an entirely new way, similar to how blockchain technology currently offers an alternative way to create, store, and transfer value.  On the surface, it appears financial services have not learned from the mistakes memorialized in the music industry that were made decades before.

By the end of the last millennium, the global recorded music industry had experienced a tremendous period of growth - from 1 billion records sold worldwide in 1974 to 3 billion records sold by 2000. At this time, technology was knocking on the doors of the music industry. Napster, a peer-to-peer (P2P) file-sharing internet-based software that allowed users to freely share music with each other, had arrived. As a result, customers were receiving unprecedented convenience – economical access to single songs rather than entire albums without leaving their homes. Then came online file-sharing sites like KaZaA & LimeWire that took the industry by storm. The convenience of digital music and file sharing became so popular that when one platform closed, others were in line to take its spot. Physical distribution, a competence that the music companies had steadily built over decades, was quickly being replaced by a customer-friendly and convenient online distribution model.

How did the record companies respond to these drastic changes that were dramatically disrupting their bottom lines? They circulated a narrative to make the public believe that Napster was a piracy concern, while in actuality, music was undergoing a radical shift and becoming more digitized due to changing consumer behavior. In contrast to customers simply buying a $16 CD, the internet allowed users greater personalization and flexibility, with access to features such as “music on the go”, customized playlists, and streaming options at a more affordable cost.

Acceptance of this changing customer behavior would have led music companies to overhaul their business models, give up greater control over distribution, and share more power with artists and customers – something the music conglomerates were simply not ready to do. Music industry leaders, such as Time Warner, Universal Music, and Sony, should have anticipated their customers’ new demands and prepared for the inevitable digital shift. Instead, they continued to try to hold onto their monopoly with their dated, clunky, physical model and initially concluded that no changes were needed. In fact, music companies started making aggressive efforts to combat the alleged piracy practices through lawsuits, and successfully lobbied for many digital rights management laws that were ultimately granted in their favor – such as the 1998 Digital Millennium Copyright Act.

It was ultimately a technology company, Apple, that understood and embraced customer needs, and initiated a new and novel platform for making digital music sales online and democratizing music. Apple successfully brought all major record companies, such as BMG, EMI, Sony, Universal, and Time Warner under its umbrella, providing a simple, intuitive, and inexpensive service. After opening the door,  many digital streaming companies, such as Spotify and Pandora followed, providing an on-demand playback model - accessibility through any mobile device, download and social media functionalities, and many other useful aspects especially suited for the “on-the-go” millennial population.

A great deal of time and money was wasted due to the music industry incumbents' resistance to online music. While Napster’s influence was perceived as negative for the industry (mainly due to the piracy aspects that the service utilized initially), the company heralded the digitization of music. Digitization led to the decentralization of the entire music industry, leveling the playing field between the major labels, musicians, and small individual contributors. It also enabled an inexpensive means of music consumption, provided artists and consumers with greater choice, and opened new avenues for entry for innovative technology companies. The one aspect that most experts unanimously agree on is that the delay and resistance to adapting new technology exhibited by the major labels led to colossal losses in time, cost, and innovation.

“It's my contention that record companies could have avoided much of this had they been smarter about dealing with Napster – if not licensing content to it directly, then doing a better job of creating a competing, cost-effective service rather than just stonewalling and treating the Internet as a threat.”
- Steve Knopper, Editor, Billboard.

‍Present - Financial Services Need to Be Proactive
We see a similar paradigm emerging today within the financial services industry. Just like the digitization of music, the digitization of value has the opportunity to provide significant benefits to financial services - access to new markets and demographics, new avenues for capital and liquidity pools, and transparency and security enhancements. Wall Street’s current state looks remarkably similar to the music industry twenty years ago - with a few companies who are complacent or actively trying to maintain their monopoly.

Financial leaders have been quick to ignore or dismiss the promise of digital assets and the decentralization benefits that blockchain can provide. These leaders have ranged from JPMorgan’s CEO, Jamie Dimon, labeling bitcoin a “fraud,” Tesla’s CEO, Elon Musk, classifying digital assets as, “bad for the environment,” and Goldman Sachs Chief Investment Officer, Sharmin Mossavar-Rahmani, referring to the ecosystem as a “bubble.” In the best scenario, these comments may be derived from a lack of understanding and apprehension.  In the worst case, these leaders have a similar fear to the record labels, that (blockchain) technology removes the need for most intermediaries and has the potential to challenge the very concept of their existence and how they make money.

Akin to how the music industry reacted to technological innovations, financial incumbents are crafting erroneous narratives as well. Whether to deter competition to obtain more time to learn the industry and build solutions, or to defame the technology publicly and ‘milk’ it for its benefits when it suits them, their doublespeak sheds light on their deceptive antics.

One of the most egregious campaigns launched by financial institutions surrounds digital assets’ negative impact on ESG. It’s understandable that they would direct the attention away from the Social and Governance aspects of the term because financial services to date are nowhere close to providing acceptable standards for either. However, their negative focus on the Environment is surprising. Hoping nobody would remember the high-frequency trading craze of a decade ago when banks were heavily investing in fiber optics infrastructure, microwave technology, and server farms next to match engines to maximize speed seems hypocritical considering the impact that had on climate change and the environment. A server is a server - whether used for trading or for mining. These firms were on a mission to reduce speed and latency, and no sustainability activist could get in their way.

One of the major differences we see between financial services and the digital asset ecosystem is their response to criticism. Whereas the financial industry appears to be defensive and combative to negative criticism, blockchain is acknowledging possible negative impacts and looking for ways to rectify these issues by exploring reusable and green energy alternatives.

The world is shifting – the drivers of change, behavior, macro perspective, and overall sentiment is different than it was 5, 10, and 50 years ago. The society that is initiating change appreciates honesty, equality, and acceptance. For financial incumbents to remain competitive, they should amend and clarify their digital asset viewpoint, collaborate with the emerging digital asset industry to provide favorable services/products, and should embrace blockchain technology.

‍Conclusion
Just as the music industry saw a wide array of benefits of technology that led to increased adoption and utility, financial incumbents appear to be suddenly feeling the reality of getting left behind with the undeniable growth of digital assets. 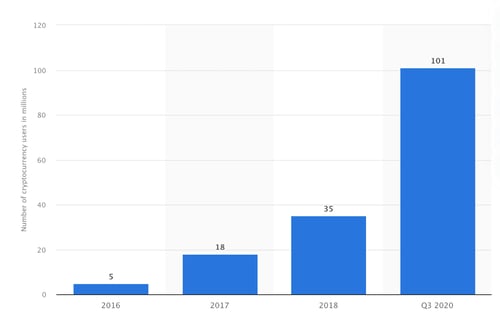 Sitting on the sidelines, just like the music industry did, and waiting for the “critical mass” to develop will only lead to a wiser, nimbler player stealthily coming in, and taking over market share. Arguably the “critical mass” is already here with a current market capitalization of just under $2T -equivalent to the 8th largest economy globally, the average daily cryptocurrency trade volume exceeding $100 billion per day, and the number of crypto wallet users surpassing 100 million almost 12 months ago. Technology drives innovation, but people move markets.

If financial incumbents could identify even one learning from the music industry’s misfortunes, it should be that nothing can slow or stop change – advancements in technology will continue to deliver more efficient ways to improve offerings and consumers will find a way to get what they want.