Permissioned Or Private Blockchains - Which One Is Right For Digital Asset Securities?

The idea of digital securities was born out of the 2017 ICO boom and has been a topic of conversation ever since. Bringing the efficiencies of blockchain, such as instant settlement and embedded auditability, to the $1,600 trillion global securities market is undoubtedly an attractive value proposition for both securities issuers and investors. Since the first digital security issuance - which was actually a securitized fund - the question of how to tokenize existing traditional financial instruments still lingers. The challenges of integrating existing financial structures and infrastructure with blockchain technology span from technical to regulatory, among others. Arca Labs, Arca’s innovation division, has addressed some of these challenges with the launch of ArCoin in July 2020. The Arca U.S. Treasury Fund is registered under the Investment Company Act of 1940 (“ ’40 Act”) and is the first closed-end fund to issue digital shares on the blockchain. The team has learned a lot over the course of the past year and we’re here to share our learnings and dive deeper into our view of the future of issuing digital asset securities. 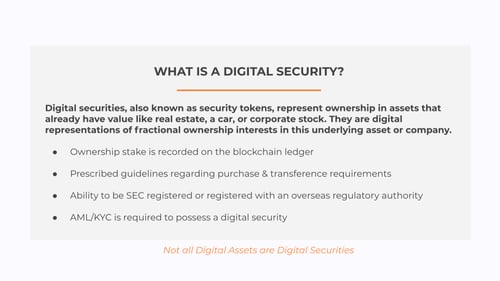 The Removal of the Need for Brokerage Firms
One of the core elements of creating a registered fund in the United States is appointing the required service providers needed to perform the operational elements of the fund. For a traditional ‘40 Act fund, these service providers include but are not limited to, an administrator, auditor, custodian, distributor, legal counsel, transfer agent, and adviser. Traditionally, ‘40 Act fund shares are held in street name at a brokerage firm, but digital shares, issued on the blockchain, enable investors to hold their shares (via wallets) and to manage the transferability of the shares in a peer-to-peer fashion. In the case of the Arca U.S. Treasury Fund, subscriptions into the Fund are issued in the form of digital asset securities, or digital 'shares', known as ArCoin, and issued on the Ethereum blockchain.

Digital shares, such as ArCoin, have the potential to offer efficiencies for shareholders as they have enhanced features when compared to traditional shares; acting as both an investment and a medium of exchange. The digitization of traditional financial instruments also provides investors with the potential for lower fees from fewer intermediaries, faster settlement, and automated agreement execution. However, change does not come without further questions. In order to understand how digital asset securities are maintained, let’s review how traditional assets are issued in comparison to the new digital workflow.

* “One aspect of compliant security tokens involves ensuring that only eligible token holders are indeed holding the tokens. An easy way to do this is through the creation of a list of approved addresses, called a ‘whitelist’, which represents authorized token holders.” - Tim Fries, The Tokenist

©2022 Arca Labs LLC does not provide investment advice. These discussions are provided for general informational purposes only, and are not solicitations or offers to sell securities or investment advisory services.